Trump Issues Executive Orders on Prescription Drugs – How Does it Affect Medicare?

Last month I wrote a blog regarding President Trump signing a bill to lower insulin drug costs for beneficiaries.

Over the weekend it looks like Donald Trump took it a step further by implementing four executive orders to lower prescription medicines across the board. Reading the details of the orders, it looks to be aimed at lowering costs for Medicare beneficiaries.

There still looks to be some uncertainty about how much people will actually save, because the health policy experts say it will likely only offer minimal relief, if in fact these executive orders come to fruition. As we all know anything that the President tries to implement in policy is always met with his detractors. So, take this for what it is worth.

Let’s talk about what we do know regarding these orders.

As we talked about last month the President wants to lower costs for the insulin drug for patients afflicted with diabetes.

The order requires federally qualified healthcare centers who administer insulin and epinephrine to pass the savings directly to diabetes patients. This order could save thousands for recipients yearly because it is estimated that in this country there are over 6 million who are uninsured.

Another huge point made stated in the order is to end criminal kickbacks by middlemen who drive up the costs for these high out-of-of-pocket costs that millions of Americans are forced to pay at their local drug stores. Under this order Medicare beneficiaries will expect to pay less out of pocket as discounts in their Medicare Part D plan because of cutting out those kickbacks.

Look at it this way, love Trump or hate Trump, he is always focused on “draining the swamp” as he has a keen eye knowing where to find the fraud.

He also wants to create a pathway for safe personal importation through the use of individual waivers to purchase drugs at lower cost from pre-authorized U.S. pharmacies. This is very important because it will give seniors more access and choices where to purchase their prescriptions.

The most controversial order according to his critics involves requiring Medicare to pay the same price for some drugs patients receive in the hospital as part of the Medicare Part B portion. It is said that other countries pay for those drugs so why should our seniors be burdened with those high costs.

If you have Original Medicare with a supplement plan it will not affect you but if you are a Medicare Advantage Plan subscriber this could save you thousands if not your life savings.

Staying on the topic of what other countries do for their medical beneficiaries, the orders that were stated on Friday afternoon included allowing certain drugs to be imported from Canada.

This would be a gamebreaker for thousands of beneficiaries because there will be scripts that will remain out of reach as far as costs.

I can tell you from personal experience that a lot of my clients purchased their scripts from Canada. For some strange reason they have a lot less bureaucracy getting brand drugs approved as generics which lowers costs for patients.

After conferring with my clients on this subject I had my own father purchase his most expensive scripts from Canada pharmacies. You do what you have to do to survive.

If there is one thing I am uncomfortable with, it is talking politics with people I do not know on a personal level. I do not think it is good for business unless both parties can actually have a calm peaceful conversation, and where have we seen much of that over the last few months? 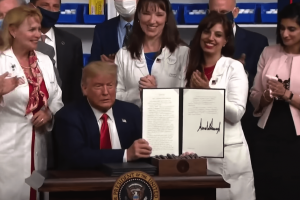 As I mentioned earlier love Trump or hate him, everyone has their opinion and they should be entitled to it, but I do know that this has been a point of action since his campaigning for President.

His critics now are saying he is signing these executive orders because he needs a boost in the polls and is scrambling because he is worried about not being re-elected.

Any person with a reasonable and pragmatic head knows lowering prescription costs for seniors has been on his mind from day 1. Let us be objective here – who really has a problem with lowering drug costs for our seniors? Our parents, aunts, uncles, and grandparents? Is this a bad thing?

I would really like to hear the arguments against it. Think of the economic boost it could provide by creating jobs for the country by bringing prescription manufacturing back to the United States.

You can guess by now I am for these executive orders, but it is easier for me to state that because of the hundreds of seniors I assist every year with their Part D drug plans.

It is heartbreaking to see these people paying over $7K on a yearly basis for their scripts, or as I mentioned earlier the economically challenged folks who cannot buy their needed scripts or who need to lower their dosages which is never a good thing.

With that said, please do not confuse my opinion on this matter with wanting to implement a Medicare-for-all system or free healthcare-for-all because I do not believe in that.

Too many young people today who have not even paid their share into the system demand free everything, and to be honest, they’re being brainwashed by our wannabe politicians so it’s not all their fault.

But the bottom line is that our seniors paid their taxes, they fought our wars, paid for our freedoms, and helped build and shape this country. Why is it so hard to understand that, and want to help relieve the financial burdens placed on them.